It’s easy to get hold of schools performance data about schools in England - data is available for download from the Department for Education website. This post uses the latest end of Key Stage data - the provisional dataset for 2016/17. You can find it here.

The dataset includes several performance measures, some easier to understand than others:

Let’s start with the first one. Most parents in England understand what 5 GCSE grades A* - C including English and Maths means. The obvious way to show the data is a column chart: 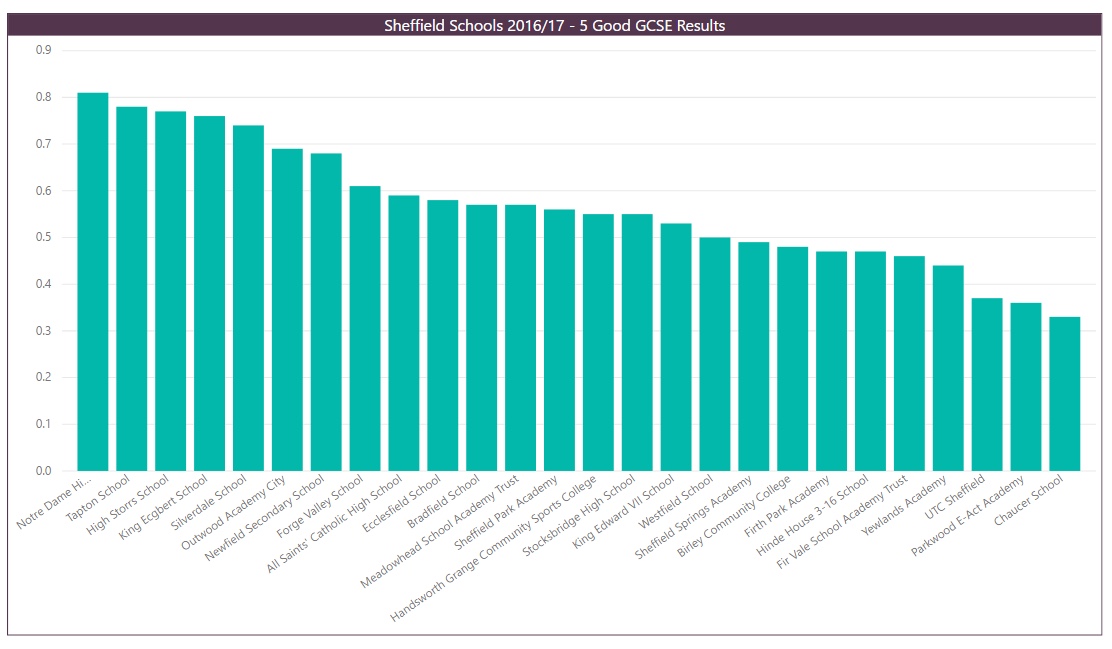 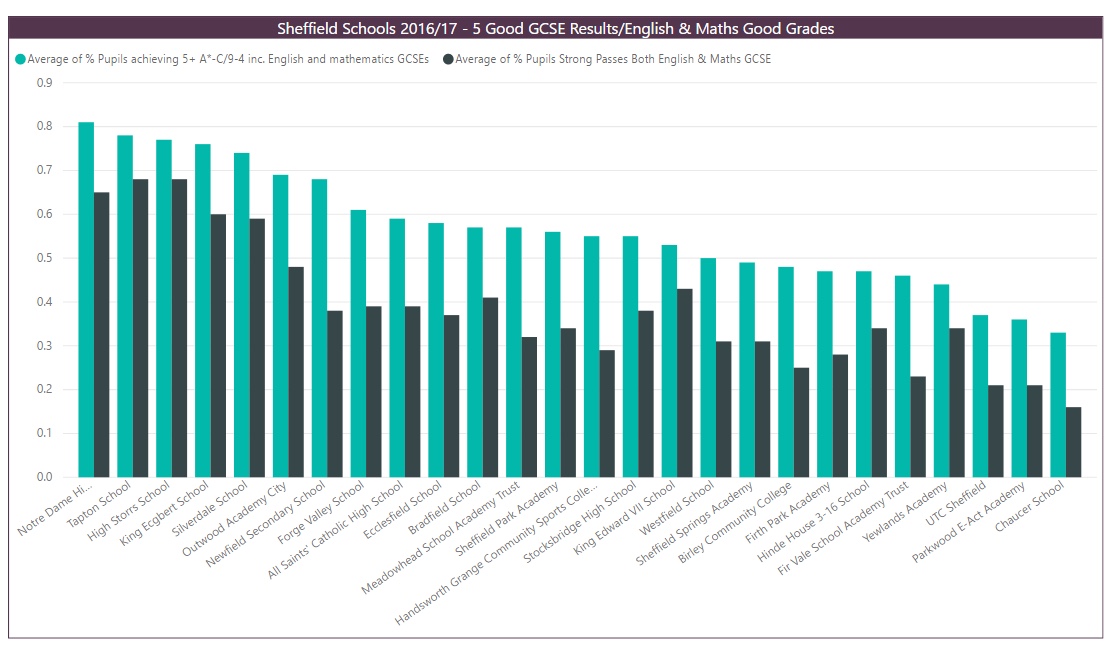 Things get more complicated with Attainment 8. Most parents probably don’t know what means. It’s a score per pupil based on 8 different subjects - one number that’s calculated by taking the pupil’s best grades across 8 different subjects and combining them into a single overall score.

I’ve added the average Attainment 8 score across all pupils for each school as a line graph on top of the two other measures - now three measures in the same chart. 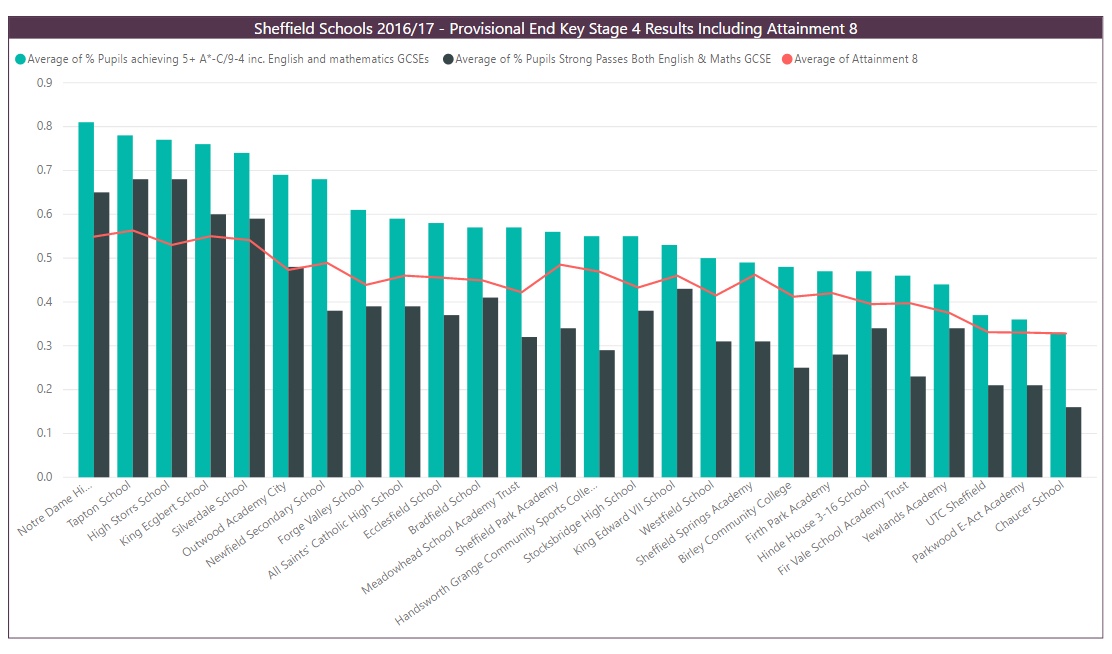 It gets harder again with Progress 8. The calculation of Progress 8 is a little more complicated.

Then you look the pupil’s actual Attainment 8 score. Their Progress 8 score is the difference between the two, divided by 10. You’ve now got a measure of how the pupil has over or under performed against their estimated Attainment 8.

The school’s Progress 8 score is just an average of all the pupil scores - it’s an attempt to measure value add. In theory at least you should now be able to identify schools that underperform - maybe they get good results from a very able cohort but they haven’t added as much value as a school that gets less good end of Key Stage 4 results but does it with a cohort that starts from a lower base.

Here’s a chart that uses Progress 8. It’s a ‘line and stacked column’ chart. The two GCSE measures and the Attainment 8 measure (divided by 100 so we can compare more easily) are added as lines. The columns are the Progress 8 scores for each school. 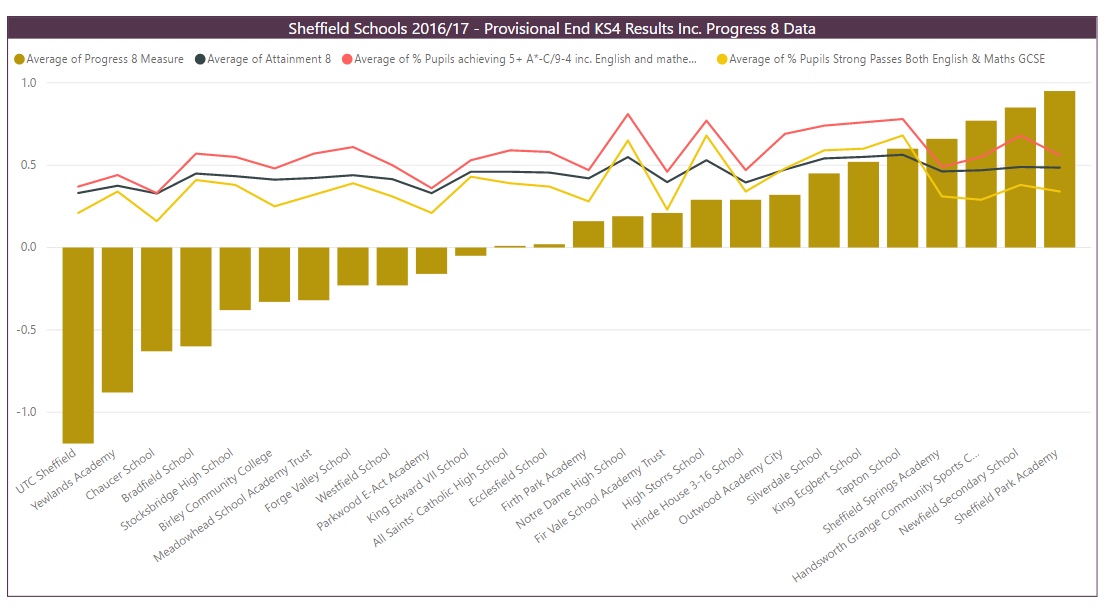 The above chart is a bit more interesting. The four schools with the best Progress 8 score - the last 4 schools at the right hand end of the chart - get less good GCSE results than the schools immediately to their left. The two good grades in GCSE English and Maths measure takes a noticeable dip. The data seems to telling us that these 4 schools are performing well - their GCSE results may not be the best in Sheffield but their Progress 8 scores suggest they are with a cohort that started from a lower base at the end of Key Stage 2.